US Navy introducing guidelines for pilots to report UFO sightings

Washington (CNN) Navy pilots who think they may have seen unidentified flying objects will now have a detailed means of reporting unexplainable events so the military can keep track of what may, or may not, be happening.

“The Navy is updating and formalizing the process by which reports of any such suspected incursions can be made to the cognizant authorities,” they said in a statement.
“A new message to the fleet that will detail the steps for reporting is in draft,” the statement added.
Politico was first to report the development.
Video shows Navy jet’s encounter with a UFO, group says
The Navy does not think that aliens have been flying in US airspace, one Navy official told CNN. But there have been “a number of reports of unauthorized and/or unidentified aircraft entering various military-controlled ranges and designated air space in recent years,” according to the statement.
“These kinds on incursions can be both a security risk and pose a safety hazard for both Navy and Air Force aviation. For safety and security concerns, the Navy and the USAF takes these reports very seriously and investigates each and every report.”
The new policy will standardize how incidents are reported, and what radar or other data may be gathered that the military can store long term for further analysis, the navy official said.
Separately a senior military official told CNN that some of the recent sightings are highly classified military aviation programs undergoing testing in the western United States.
Because the sightings have garnered public attention, senior Navy intelligence officials have briefed Congress, as well as aviators on the safety hazards.
The Pentagon has intermittently over the decades funded various efforts to evaluate unexplained incursions and phenomena, but the last official effort was shuttered in 2012. 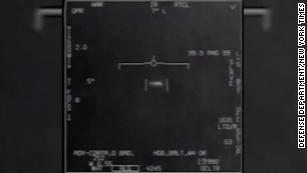 Former Pentagon UFO official: ‘We may not be alone’
A former Pentagon official, who led that program and resigned in protest when it was ended, told CNN’s Erin Burnett in 2017 “that there is very compelling evidence that we may not be alone.”
Luis Elizondo made clear he could not speak on behalf of the government, but strongly implied there was evidence that stopped him from ruling out the possibility that alien aircraft visited Earth.
“These aircraft — we’ll call them aircraft — are displaying characteristics that are not currently within the US inventory nor in any foreign inventory that we are aware of,” Elizondo said of objects they researched.
He said the program sought to identify what had been seen, either through tools or eyewitness reports, and then “ascertain and determine if that information is a potential threat to national security.”
“We found a lot,” Elizondo said.
The former Pentagon official said they identified “anomalous” aircraft that were “seemingly defying the laws of aerodynamics.”
“Things that don’t have any obvious flight services, any obvious forms of propulsion, and maneuvering in ways that include extreme maneuverability beyond, I would submit, the healthy G-forces of a human or anything biological,” Elizondo said.

A member of the flight crew of the USS John C. Stennis aircraft carrier walks past an F/A-18 fighter jet on Friday, Dec. 21, 2018. The U.S. aircraft carrier sailed into the Persian Gulf on Friday, becoming the first since America’s withdrawal from the Iran nuclear deal and breaking the longest carrier absence in the volatile region since at least the Sept. 11 terror attacks. (AP Photo/Jon Gambrell)