Top Guns: Most Nerve-Racking Russia vs US Aerial Intercepts (VIDEOs)

Following the publication of a video of US F-15 fighters intercepting Russian Su-30 multipurpose fighter jets by US Air Forces in Europe, Sputnik looks at some other recent incidents that involved the two countries’ warplanes.

In November and December 2017, the F-15C Eagles aircraft were scrambled to intercept the Russian Navy Su-30 aircraft in “international airspace near the Baltics.”

Commenting on the US Air Forces in Europe’s video of the two intercepts, the Russian Defense Ministry said in a statement that the crews of the Russian fighters Su-30SM conducted scheduled training flights over the neutral waters of the Baltic Sea on November 23 and December 13.

The ministry added that during the flights, which were conducted in strict compliance with international aviation, the F-15 jets “approached the Russian fighter jets at a safe distance, after which they changed course and flew away.”

In mid-December, Russian and US warplanes had a disturbing encounter in the skies above Syria.

The incident took place on December 13, when two Su-25s  escorted a humanitarian convoy near Mayadin [the western bank of the Euphrates River] at an altitude of 3,300 meters and were approached by a F-22 on the east side of the river.

“By firing off decoy flares, the F-22 interfered with the flight of a pair of Russian Su-25s. A Russian Su-35 fighter jet, performing an air cover mission at an altitude of 10,000 meters, swiftly approached the F-22 from the rear, forcing the American aircraft to leave the area,” the Russian Defense Ministry said.

In June 2017, NATO aircraft were chased away by Russian fighter jets after it tried to approach Russia’s Defense Minister Sergei Shoigu’s plane, which was en route to the westernmost Russian enclave of Kaliningrad.

The F-16 multirole fighter jets had to retreat after a Russian Sukhoi Su-27, one of the aircraft escorting Shoigu’s plane, displayed its weapons.

Incident With B-52 Bomber

Earlier that month, the Russian Defense Ministry said that it had scrambled a Su-27 fighter over the Baltics to intercept and escort a US B-52 strategic bomber that was approaching Russia’s borders.

The ministry said in a statement that “the crew of the Russian Su-27, in approaching the aerial object at a safe distance, identified it as a US B-52 strategic bomber and escorted it.”

US Reconnaissance Plane in the Black Sea

In May, a Russian Su-30 fighter jet was scrambled over the Black Sea to intercept a target approaching Russia’s border, according to the country’s Defense Ministry. 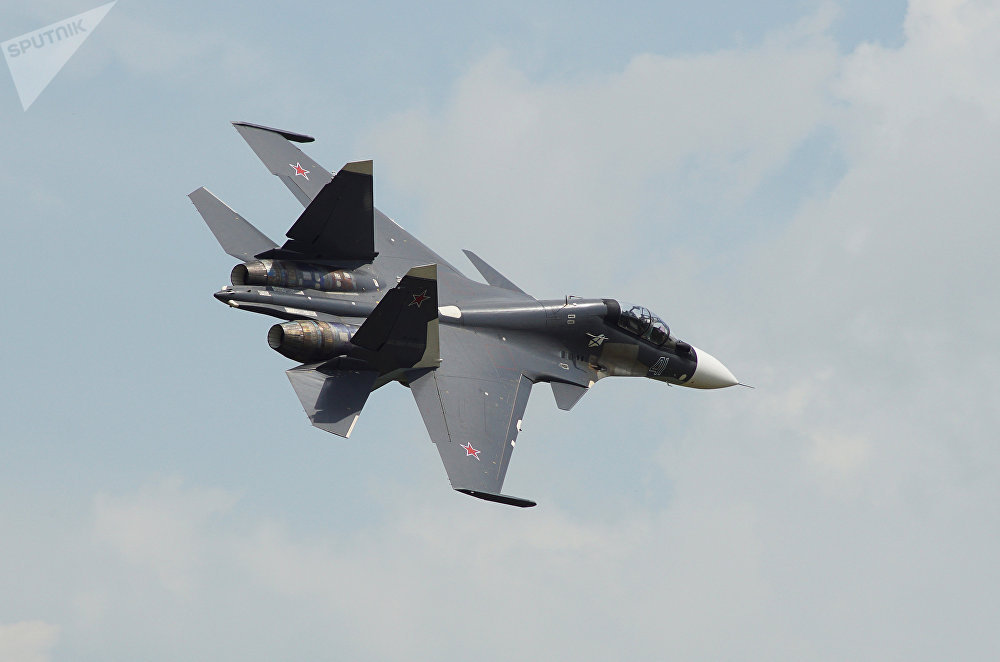 NBC News cited a spokesperson for US Naval Forces Europe as saying that that the Russian warplane “came within approximately 20 feet of a US Navy P-8A Poseidon in international airspace.”

The Russian Defense Ministry, for its part, said that the US reconnaissance plane changed its route after approaching the Su-30 over the Black Sea, while the Russian fighter returned to its home base.

In April 2017, the Pentagon said that two fifth-generation US F-22 Raptor fighters were scrambled to intercept two Russian TU-95 Bear bombers off the coast of Alaska.

Described by a US military official as safe and professional, the intercept occurred about 100 miles from Kodiak Island after the Russian bombers reportedly flew into the Alaskan Air Defense Identification Zone.

CNN cited the official as saying that “there was no cockpit-to-cockpit radio communication between the US and Russian pilots.”