International Space Station’s orbit to be raised by 600 meters

The medium height of the International Space Station’s flight orbit will be raised by 600 meters with the help of the engines of the Zvezda module on January 17, Russia’s Mission Control said on Friday.

“The propulsion system of the Zvezda module will work for 22 seconds. According to preliminary calculated data, the maneuver will increase the medium height of the ISS’s flight orbit by 600 meters to 404.4 km,” Mission Control said.

Meanwhile Russia’s State Space Corporation Roscosmos has said the Zvezda module will switch on its engines at 23:15 Moscow time on January 17.

The space freighter’s launch is scheduled for February 11, 2018. It was earlier reported that the Progress MS-08 resupply ship would be the first cargo spacecraft to fly to the ISS using a two-rotation scheme (a three-hour travel from the blastoff to the docking with the space station).

It was originally planned that a Progress MS-07 cargo spacecraft would for the first time perform its flight to the world’s sole orbiter under a three-hour scheme (two revolutions around the Earth’s orbit) but finally the flight was carried out under a two-day scheme.

Executive Director for Manned Space Flights at the State Space Corporation Roscosmos Sergei Krikalyov earlier told TASS that a micro-computer glitch had been behind a decision to reschedule the launch of Russia’s Progress MS-07 resupply ship from October 12 to October 14 but did not elaborate on this issue.

He said that the faulty micro-computer had been replaced.

Current position of the ISS

The International Space Station (ISS) is the most complex international scientific and engineering project in history and the largest structure humans have ever put into space. This high-flying satellite is a laboratory for new technologies and an observation platform for astronomical, environmental and geological research. As a permanently occupied outpost in outer space, it serves as a stepping-stone for further space exploration. This includes Mars, which NASA is now stating is its goal for human space exploration.

The space station flies at an average altitude of 248 miles (400 kilometers) above Earth. It circles the globe every 90 minutes at a speed of about 17,500 mph (28,000 kph). In one day, the station travels about the distance it would take to go from Earth to the moon and back. The space station can rival the brilliant planet Venus in brightness and appears as a bright moving light across the night sky

Dragon Departs Station and Heads Back to Earth for Splashdown

Ground controllers released the SpaceX Dragon cargo spacecraft from the International Space Station’s robotic arm at 4:58 a.m. EST. The capsule will begin a series of departure burns and maneuvers to move beyond the “keep out sphere” around the station for its return trip to Earth. Dragon’s thrusters will be fired to move the spacecraft … https://blogs.nasa.gov/spacestation/2018/01/13/dragon-departs-station-an… class=”more-link”>Continue reading “Dragon Departs Station and Heads Back to Earth for Splashdown”

The International Space Station (ISS) Program’s greatest accomplishment is as much a human achievement as it is a technological one—how best to plan, coordinate, and monitor the varied activities of the Program’s many organizations.

An international partnership of space agencies provides and operates the elements of the ISS. The principals are the space agencies of the United States, Russia, Europe, Japan, and Canada. The ISS has been the most politically complex space exploration program ever undertaken. 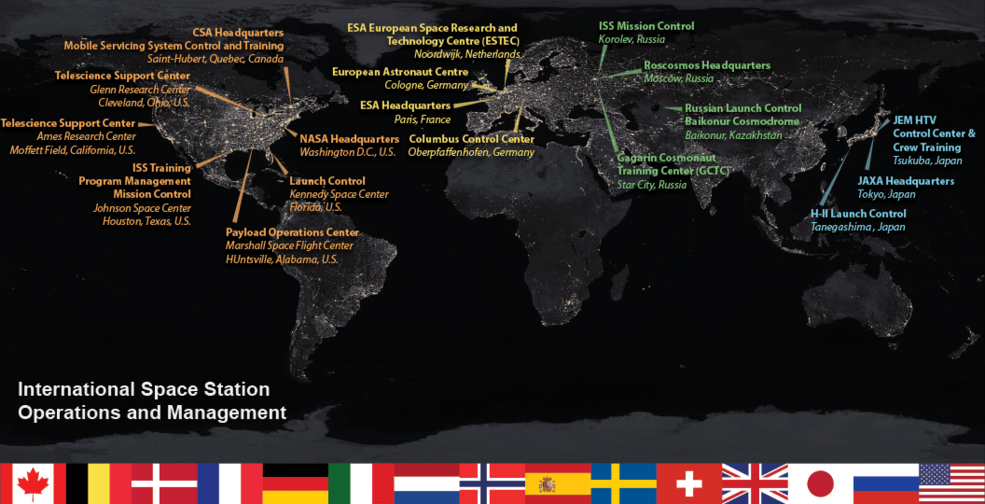 Facilities around the world support the operation and management of the International Space Station.
Credits: NASA

Elements launched from different countries and continents are not mated together until they reach orbit, and some elements that have been launched later in the assembly sequence were not yet built when the first elements were placed in orbit.

Operating the space station is even more complicated than other space flight endeavors because it is an international program. Each partner has the primary responsibility to manage and run the hardware it provides.

Construction, assembly and operation of the International Space Station requires the support of facilities on the Earth managed by all of the international partner agencies and countries involved in the program.

Launched in 1998 and involving the U.S., Russia, Canada, Japan, and the participating countries of the European Space Agency—the International Space Station is one of the most ambitious international collaborations ever attempted. The largest space station ever constructed, the ISS continues to be assembled in orbit. It has been visited by astronauts from 18 countries—and counting.