Smart drones and artificial intelligence are part of the European Union’s plans for defensive research, but many academics oppose the programme.

Hovering in the sky like bees, robotic drones swarmed over an airfield in the United Kingdom in February 2018, while their wheeled siblings zoomed around on the tarmac below. Equipped with pressure sensors and cameras, the autonomous robots worked together to monitor moving targets — a test of what the system might be able to do in a war zone.

“If you are able to control all these vehicles intelligently, you’re able to monitor a particular location persistently, or use them to disrupt or confuse the enemy,” says Vaios Lappas, an engineer at the University of Patras in Greece, and a member of the collaboration, called EuroSWARM.

The project is the first to demonstrate all the key building blocks of a self-organizing swarm of drones, he says. It is also a pioneer in another way, marking the first time the European Union has invested in military research.

EuroSWARM will soon have company. The EU is about to drastically increase its spending on military research, following a vote by the European Parliament last month to approve €4.1 billion (US$4.6 billion) for this purpose for the period 2021–27. The final figure will be fixed later this year, when member states and the newly elected parliament agree on the EU’s next long-term budget.

The investment is designed to increase Europe’s military power by boosting spending on defence research and development (R&D), which has been falling in most European nations since the end of the cold war. At the same time, EU leaders hope that collaborative research will reduce the duplication of effort that comes from countries doing R&D in parallel. The fund will increase cash for fields from materials science to artificial intelligence and make the EU the fourth-largest spender on defence R&D in Europe, behind the United Kingdom, France and Germany (although total defence-research spending in the bloc will remain a fraction of that in the United States, the world’s biggest investor in military R&D; see ‘Military money’). “I think the impact will be significant,” says James Black, a senior analyst at RAND Europe, a non-profit research organization and consultancy in Cambridge, UK. 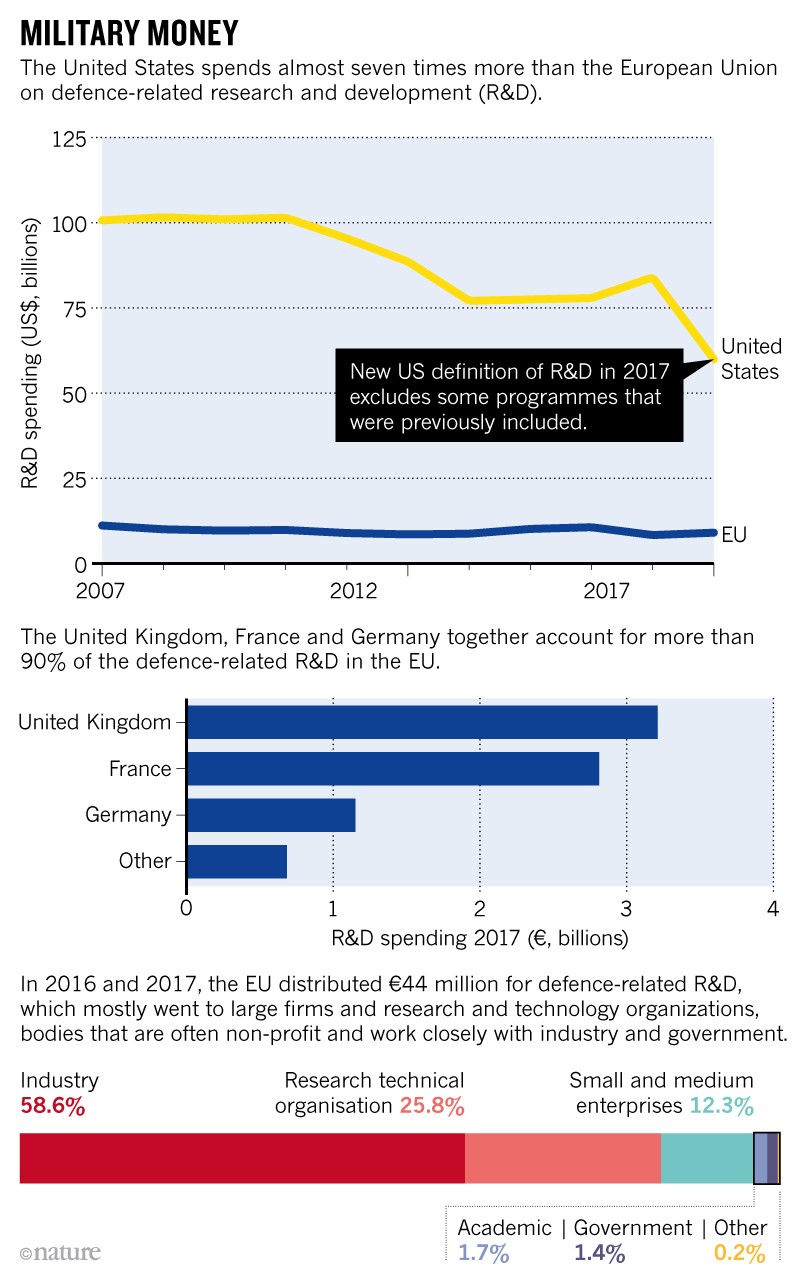 But the move is controversial. Even people who favour the increased investment worry that the EU does not yet have clear defence goals and so the research funding could miss its target. And few academics have engaged with the programme yet. In fact, more than 1,000 researchers have signed a petition challenging the EU’s move into military research and criticizing the fund’s lack of transparency and oversight. “This is the first time Europe has ever invested as a union in defence, so there’s a lot of soul-searching as to how things should evolve and how investment should be made,” says Lappas.

Created in the shadow of the Second World War, what was then called the European Communities was established on principles of promoting peace on the continent. But the bloc began to embrace military cooperation in 2014, following increasing tensions on the union’s borders, including Russia’s incursion into Ukraine, and the Arab Spring uprisings. That year, Jean-Claude Juncker was elected to lead the European Commission, the EU’s policy-making arm, and he went on to embrace defence as an opportunity. By boosting the union’s activities in this area, says Black, Juncker saw a way for the EU to assert itself in the wake of the 2016 Brexit vote and the US election of Donald Trump, who accused European countries of not “paying their fair share” of military spending by the North Atlantic Treaty Organization.

Out of that emerged a new and growing role for Europe in defence, of which R&D is just one strand. New initiatives are turning Europe into an independent military player. Senior European politicians have proposed forming an EU army and allocating funds to underpin joint military operations.

The first outlay in research was small: a €1.3-million pilot scheme beginning in 2016, which included funding for EuroSWARM, followed by a three-year, €90-million programme in 2017. The European Parliament’s decision on 18 April to create the European Defence Fund would increase annual funding for military research by more than ten times, to around €500 million a year, starting in 2021. And it would also boost annual spending on military industrial development and prototyping to around €1 billion a year. Together, they total an investment of €13 billion from 2021 to 2027, in current prices. “Certainly, by the standards of collective decision-making among 28 nations, it’s all come together pretty quickly,” says Black.

So far, the pilot phase and initial three-year programme for research have focused mostly on funding technologies that are relatively late in their development. One example is the €35-million OCEAN2020 project, which trialled ways to improve surveillance at sea by integrating drones and crewless submarines into operations involving several navies.

The skew towards later-stage development might be why university academics have so far largely taken a back seat, says Lappas. In 2016 and 2017 (the only data available so far), academic institutions received less than 2% of the €44 million allocated, whereas 71% went to companies and 26% went to research and technology organizations (RTOs) — such as the Netherlands Organisation for Applied Scientific Research (TNO).

This contrasts with Europe’s €75-billion Horizon 2020 research programme; from 2014 to 2016, higher-education institutions took home 39% of that funding. And the split in EU military-research spending so far falls below funding ratios at the US Department of Defense, which awarded 7% of its R&D support to universities in 2016.

The imbalance is probably not intentional, but owing to both a lack of awareness among academics and a perpetuation of existing research collaborations, says Lucie Béraud-Sudreau, a research fellow at the London-based International Institute for Strategic Studies. Defence R&D is a “pretty closed environment” with universities often on the outside, adds Frans Kleyheeg, a specialist on defence at the TNO. In Western Europe, defence R&D is often done in RTOs such as Kleyheeg’s organization and by government agencies and defence companies, whereas in Eastern Europe, dedicated defence universities play a larger part, he says.

Future projects might skew more towards fundamental science and universities. The commission’s 2019 call for proposals, announced in March, includes €11.5 million for “disruptive technology” in fields from artificial intelligence to quantum technologies — research that commission official El?bieta Bie?kowska said is part of Europe’s answer to the US Defense Advanced Research Projects Agency, which funds high-risk research that is often at an early stage.

In the past, groundbreaking technologies such as satellite navigation and the Internet often came from defence-related research, yet today, innovations increasingly originate in civilian R&D, says Kleyheeg. “It will be the challenge for the future to bring these innovations to the defence domain,” he says.

Although many researchers remain unaware of the scheme, others are avoiding it, says Bram Vranken, a campaigner and researcher with the Belgian peace organization Vredesactie in Antwerp. His is one of a number of organizations across Europe that have formed Researchers for Peace, a campaign group that gathered more than 1,000 signatures against the fund. The largest share has come from Germany, where more than 60 universities have signed voluntary agreements not to carry out military R&D.

The speed of the fund’s development has also worried campaigners. The multibillion-euro programme is being established before most of the results from the initial phases are in. “This is a fundamental change in what the EU as an institution is doing, and it’s been decided quite rapidly, without a lot of public debate,” says Vranken.

Critics also argue that the defence industry has too much control over the programme, which could allow its interests to trump the EU’s in shaping the programme. Representatives of arms companies made up 7 out of 16 members of a group established by the commission in 2015 to help advise on establishing the fund. One of the companies, Leonardo in Rome, ended up receiving the largest share of the 2017 funding, at €5.5 million. And although ministries of defence will get confidential reports on all research results, as with Horizon 2020 funding, companies and institutions carrying out the research will retain the intellectual property, meaning that countries might have to pay to make use of them.

Defence analysts such as Black say that industry is conventionally involved in setting priorities, because of the unusual qualities of the defence market. Governments have close relationships with arms companies because they are the only buyers and those firms are often the only suppliers.

But concerns about transparency have been exacerbated by some decisions, says Vranken. The commission revealed the group’s agenda and minutes of its meetings only after it was prompted by the European Ombudsman. And for security reasons, the commission says it is not planning to disclose which experts will review future proposals. Unusually, the European Parliament will not get a role in deciding on an annual basis the research topics to be covered.A commission spokesperson says that its proposal for a European Defence Fund, as well as its precursor programmes, had “all been debated and adopted in full transparency and respect of democratic principles by the European Parliament and Council”. The commission also said it would “build on lessons learned from the preparatory phase” in implementing the programme.

For Frédéric Mauro, a lawyer and specialist in European defence policy, the greatest challenge the European Defence Fund faces is connecting with EU defence planning — carried out across various European bodies and initiatives. The planning process is complicated and dysfunctional, he says. “If you don’t put that right, you won’t be able to orient European defence research, and that’s a major problem,” he says.

Brexit presents another challenge. Although rules governing the European Defence Fund will be loosely based on those of Horizon 2020, which allows non-member states and non-associate countries to participate in several schemes, rules of participation will be stricter for defence grants to ensure that sensitive information and intellectual property remain in the union. Experts agree that the Brexit vote encouraged the fund’s creation, because the United Kingdom had long opposed communal EU defence policies. Britain is one of the continent’s highest spenders on military R&D, but if it leaves the EU, the rules could put up barriers that discourage UK firms from taking part, says Béraud-Sudreau.

A final challenge for Europe will be in ensuring it keeps up with the ways in which warfare is changing, says Kleyheeg. “Typically we look backwards at lessons learned,” he says. “We’ve got to start to think about what the future war will look like.”