Construction of China’s first full-sized aircraft carrier is well under way, according to satellite images obtained and analyzed by a U.S. think tank.

A satellite image shows what appears to be the construction of a third Chinese People’s Liberation Army-Navy aircraft carrier at the Jiangnan shipyard in Shanghai on 17 April 2019. (Photo by CSIS/ChinaPower/Maxar Technologies 2019/Handout via REUTERS)

The images from April, provided to Reuters by the Center for Strategic and International Studies (CSIS) in Washington, reveal considerable recent activity during the last six months on a large vessel at the Jiangnan shipyard outside Shanghai.

China has not formally confirmed it is building a third carrier, despite recent hints in state media, and the timing and extent of its carrier program remain state secrets.

The Pentagon said last week that work had begun, but no images have emerged until now. 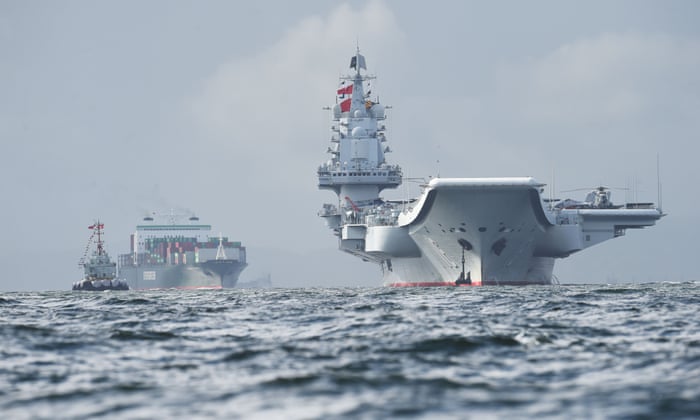 Both Asian and Western militaries, and regional security analysts, are seeking information on the carrier, which is expected to be China’s first large, modern platform capable of leading a full range of strike group operations.

The effort to build a large, locally designed carrier is seen as a core part of China’s extensive military modernization drive. A series of recent Reuters Special Reports showed how that effort is challenging decades of U.S. strategic superiority in East Asia.

The CSIS images show a bow section that appears to end with a flat 30-metre (98-foot) front and a separate hull section 41 meters wide, with gantry cranes looming overhead.

Fabrication halls the size of several soccer pitches have been built nearby, and work appears to be continuing on a floodable basin, possibly to float the finished hull into the nearby Yangtze River estuary.

“While details regarding the Type 002 are limited, what is observable at Jiangnan is consistent with what is expected for the People’s Liberation Army Navy’s third aircraft carrier,” said the CSIS’ ChinaPower analysis, published on its website Tuesday.

CSIS analyst Matthew Funaiole told Reuters that images taken late last year were inconclusive, but that now the work under way is clear.

“From what we can see there has been a lot of activity in the last six months or so,” he said. “It would appear that it is the third carrier, and if it is not, it’s hard to envisage what other large vessel it would be.”

The Pentagon’s annual report on China’s military modernization, issued last Friday, noted that the third carrier would probably be larger than the first two and fitted with a catapult launch system to accelerate aircraft during takeoff.

Funaiole and other analysts said it was unclear what kind of catapult – traditional steam-powered or a more cutting-edge electromagnetic system – would be used.

It also remains unclear whether the Type 002 would be nuclear-powered. China has 10 nuclear-powered submarines, but so far no surface ships with nuclear propulsion; some analysts think China is not ready to make that step.

Singapore-based regional security analyst Ian Storey said a full-sized carrier would make some of China’s neighbors nervous and highlight the importance of their strategic relationship with the United States.

“Once completed, it will outclass any warship from any Asian country, including India and Japan,” said Storey, of the ISEAS Yusof Ishak Institute. “It is yet another indication that China has emerged as Asia’s paramount naval power.”

China’s first two carriers are relatively small, with only up to 25 aircraft, less than half the number aboard U.S. carriers, and have jump ramps built into their bows. That configuration limits not just the types of aircraft that can fly off them, but how much weaponry and fuel they can carry.

Its first carrier, the Liaoning, was a Soviet-era Ukrainian ship bought secondhand in 1998 and re-fitted in China. A still-unnamed second carrier based on that design, launched in 2017, was built locally.

The Liaoning had been seen as more of a training platform for teaching personnel the tricky art of carrier operations. But last month, Chinese state media said the ship “is starting to play a combat role following recent modifications and intensive training exercises.”

China’s two aircraft carriers, one purchased from Ukraine in 2012 and one domestically built (background), are moored in a shipyard as they undergo modifications in Dalian, a major Chinese port city in Liaoning Province, on July 19, 2018. (Photo by Stephen Shaver/UPI)

The second carrier has been undergoing sea trials from its base in northern Dalian and is not expected to enter service until 2020.

China’s Ministry of Defence did not respond to a request for comment.

Satellite pictures analyzed by China Power and the Center for Strategic and International Studies show China is working on its third aircraft carrier. (Photo by Maxar Technologies/ChinaPower/CSIS)

A large vessel is being assembled and a floodable basin is being constructed at a new assembly facility to the southeast of the existing shipyard. A bow and main hull section of the vessel are taking shape, though no access to the river to launch vessels is currently available.

China’s first aircraft carrier Liaoning weighs 60,000 to 66,000 tons and is the flagship of China’s navy.

The Soviet Navy launched the Kuznetsov-class aircraft cruiser in 1988 as Riga and renamed it Varyag in 1990. When the Soviet Union was dissolved in 1991, construction was halted and the ship was put up for sale by Ukraine. The ship was rebuilt and commissioned into the People’s Liberation Army Navy in 2012.

China has been modernizing its military with a “world-class” force projected by 2049, according to the Pentagon report. Besides the carriers, China is developing a hypersonic glide vehicle.

In the Arctic, China has launched icebreakers and civilian research stations in Iceland and Norway with a fleet of nuclear-armed submarines to the Arctic region forecast, the Pentagon reported.

And, China has been maintaining its military presence in the disputed South China Sea.

On Monday, Beijing’s claim to the Gaven and Johnson reefs was challenged by two U.S. guided-missile destroyers, the USS Preble and USS Chung-Hoon. It asserted international rights to “innocent passage” and “challenge excessive maritime claims” to those areas by the Philippines, Taiwan and Vietnam.

China’s Ministry of Foreign Affairs Geng Shuang said country’s navy “identified and warned off” the U.S. warships. An international tribunal in 2016 has discredited China’s claims to the area.