The biennial Zhuhai arms expo is a chance for Chinese defense contractors to show off their newest weapons.

China’s 2018 Zhuhai Air Show is off and running, showing off some intriguing new weapon designs and some designs that look kind of familiar. Held every two years, Zhuhai is part air show and part arms expo for new weapons systems developed by Chinese defense contractors.

If you can’t make it to China, the best place to watch the air show unfold is Twitter. There are several social media accounts sharing pictures of new military equipment from the show floor. This year exhibitors are showing off new stealthy drones, missiles, and more.

One particularly interesting new development is the CH-7 (“Caihong,” or “Rainbow”) UCAV, or unmanned combat aerial vehicle. CH-7 is a tailless, stealthy drone developed by Chinese Aerospace Science and Technology Corporation, a state-owned aerospace company that builds space rockets and the CH series of combat drones including CH-4, a Predator clone.

According to China’s state-run Global Times newspaper, CH-7 is designed to “detect and destroy hostile strategic targets.” So, it has a weapon-carrying role, but it’s unclear whether that’s air-to-ground or even air-to-air. The pictures above show two internal payload bays inside the landing-gear arrangement. The drone will reportedly fly for the first time in 2019 and is scheduled to enter service in 2022. 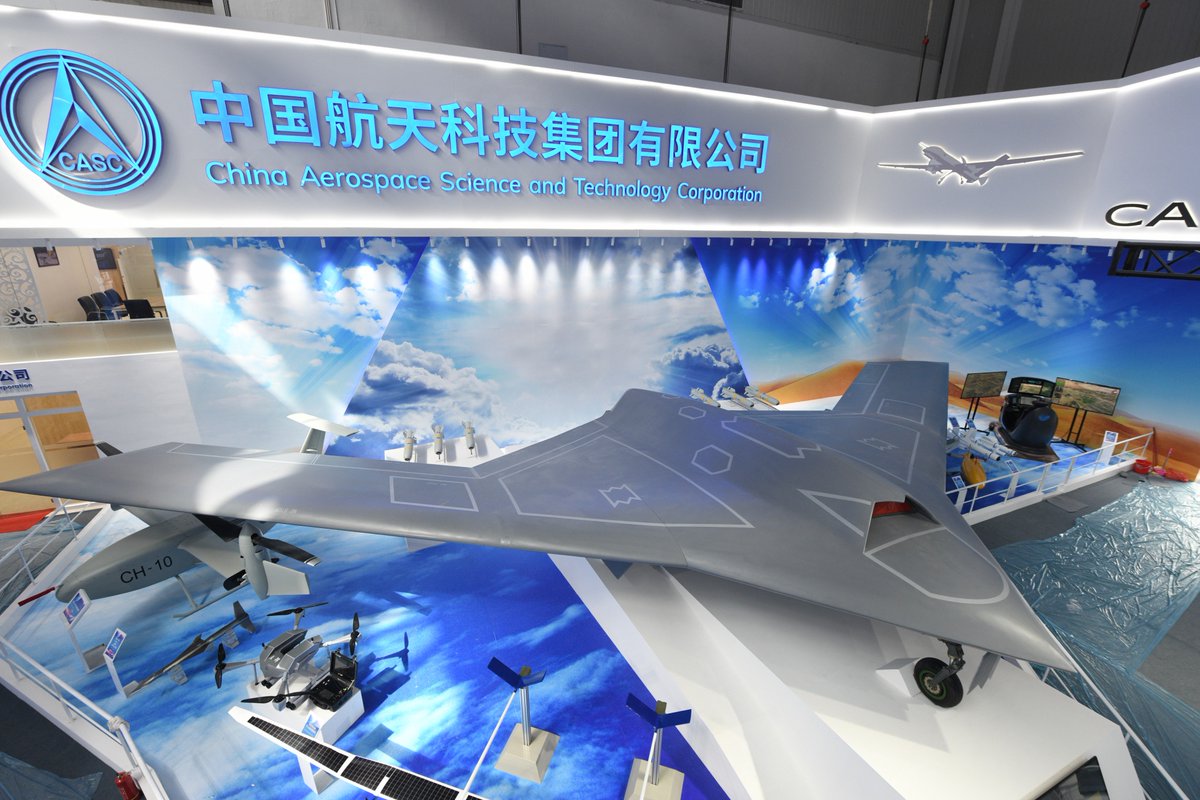 China’s new generation stealth combat UAV CH-7 was formally released on Monday. The UAV is the most advanced drone that China has developed, which could be used to detect and destroy hostile strategic targets. (Photo by Wan Quan –  twitter.com/globaltimesnews)

Another drone that looks familiar is this copy of the Lockheed Martin RQ-170 Sentinel drone: 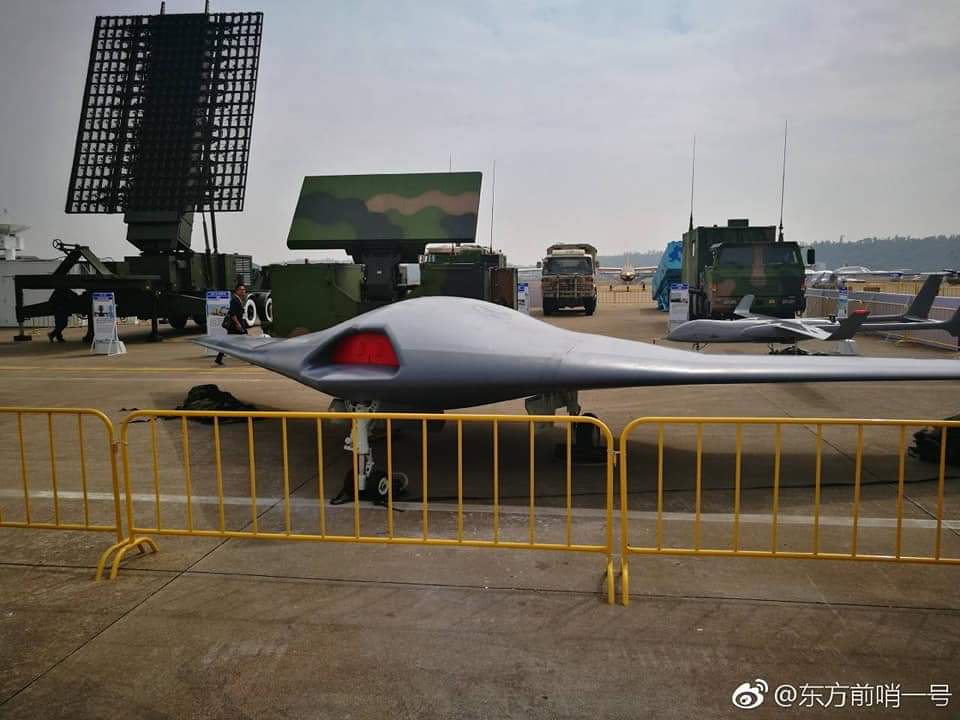 And here’s yet another drone, reportedly from China’s Chengdu Aerospace Corporation. This drone looks fairly small and likely has a surveillance-only function: 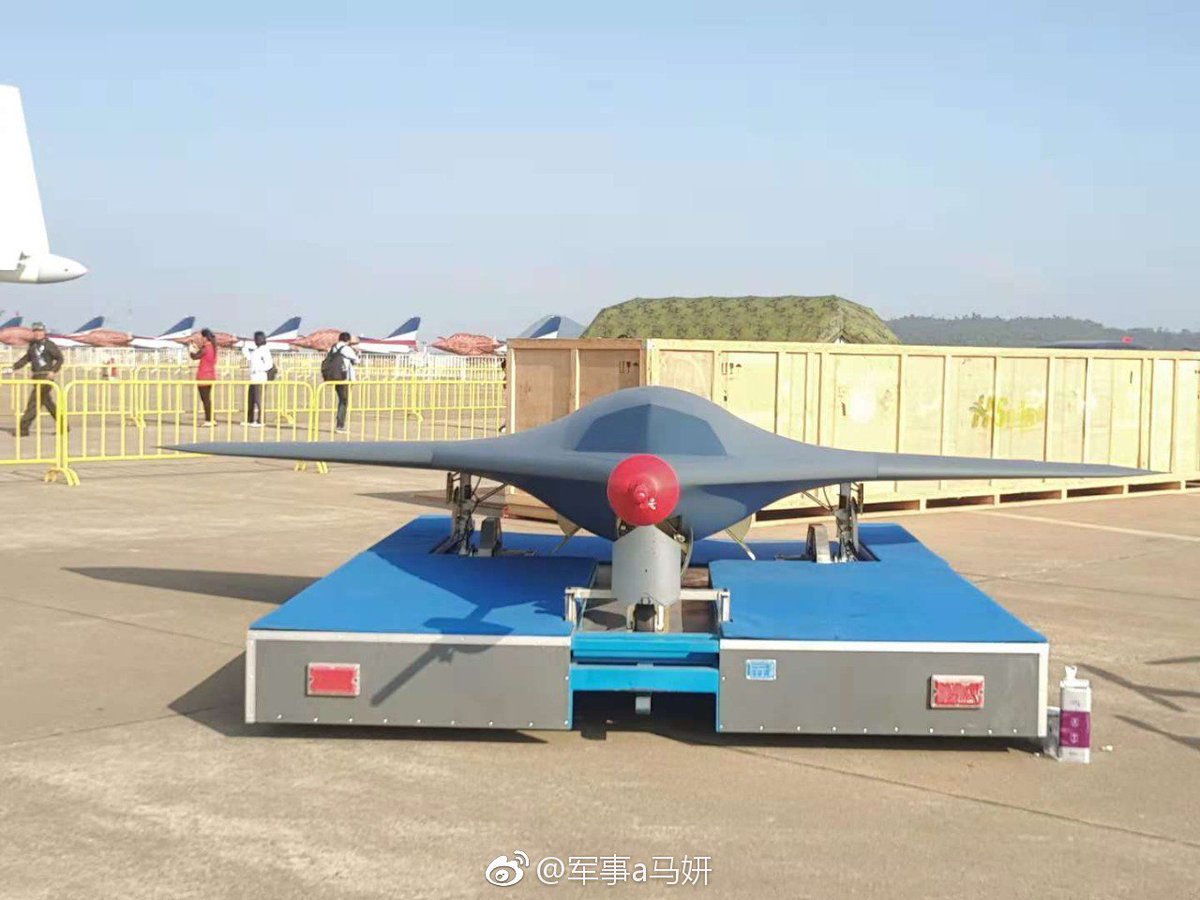 Closer to the ground, a new anti-tank drone debuted at Zhuhai. The UCAV is labeled here as the Golden Eagle CR-500, but the body differs slightly from earlier reported photos of the CR-500. The drone pictured here has eight anti-tank guided missiles which are not named but are likely smaller missiles like the HJ-12 “Red Arrow” “fire and forget” anti-tank missile, meaning the drone operator merely has to lock on to the enemy armored vehicle and the missile will steer itself to target: 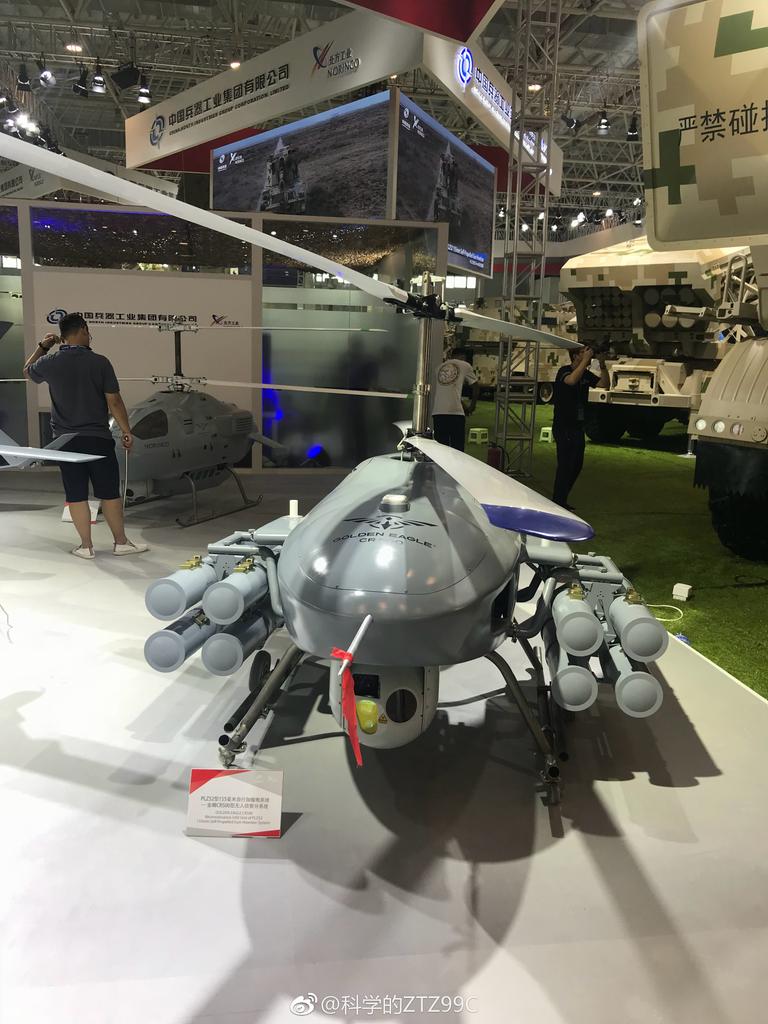 In other news, a new anti-ship ballistic missile is on the market, the CM-401. Most anti-ship missiles are low-flying cruise missiles, but the CM-401 flies a ballistic trajectory to its target. There are reports on social media that it is actually a hypersonic glide vehicle, flying below typical ballistic missile altitudes. It also has a 180-mile range and flies at speeds of up to Mach 6 in its terminal phase, making it very difficult for most navies, even the U.S. Navy, to intercept: 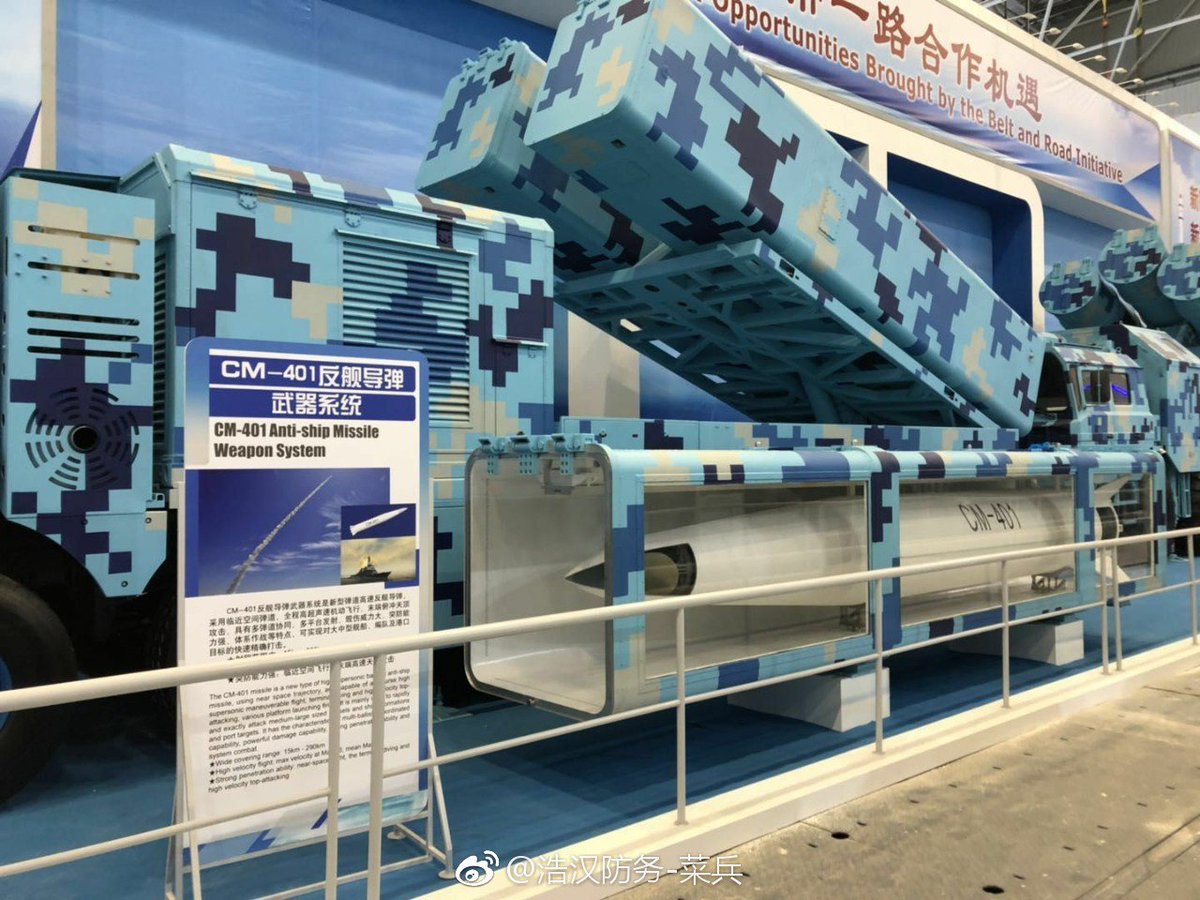 Ground weapons are also being exhibited at Zhuhai. The LW30 Laser Weapon System is a ground-based laser mounted on a heavy truck with a 30-kilowatt laser that is meant to down unmanned aerial vehicles, similar to the U.S. Army’s ATHENA battlefield laser: 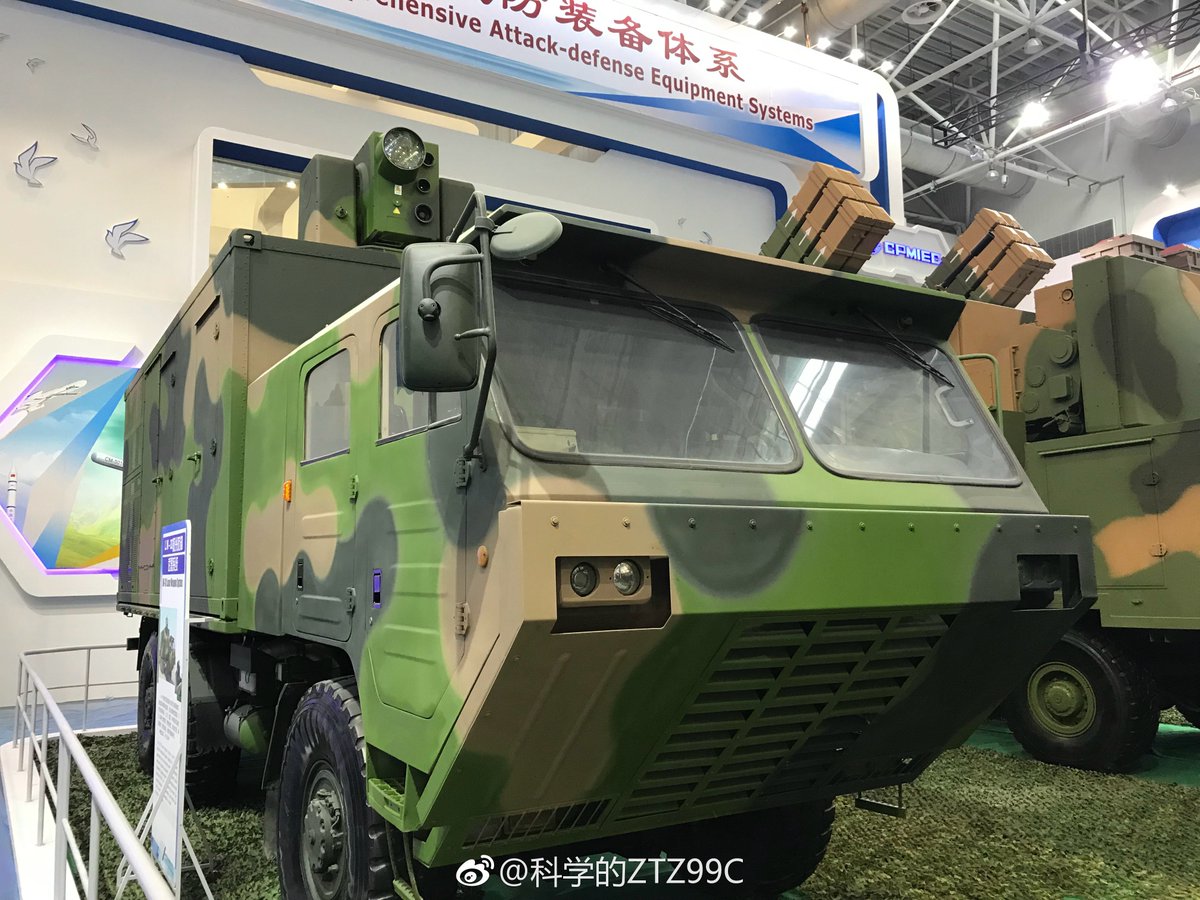 One of the oddest exhibitions is this fighter jet mockup. The pictures were widely distributed on Twitter as a new fighter named “Kuang Chi.” It looks like a copy of the U.S. Air Force’s F-22 Raptor fighter. In fact, with the exception of a few very minor differences, it looks exactly like the F-22. In truth, it’s really just an F-22. Kuang Chi is the name of the company: 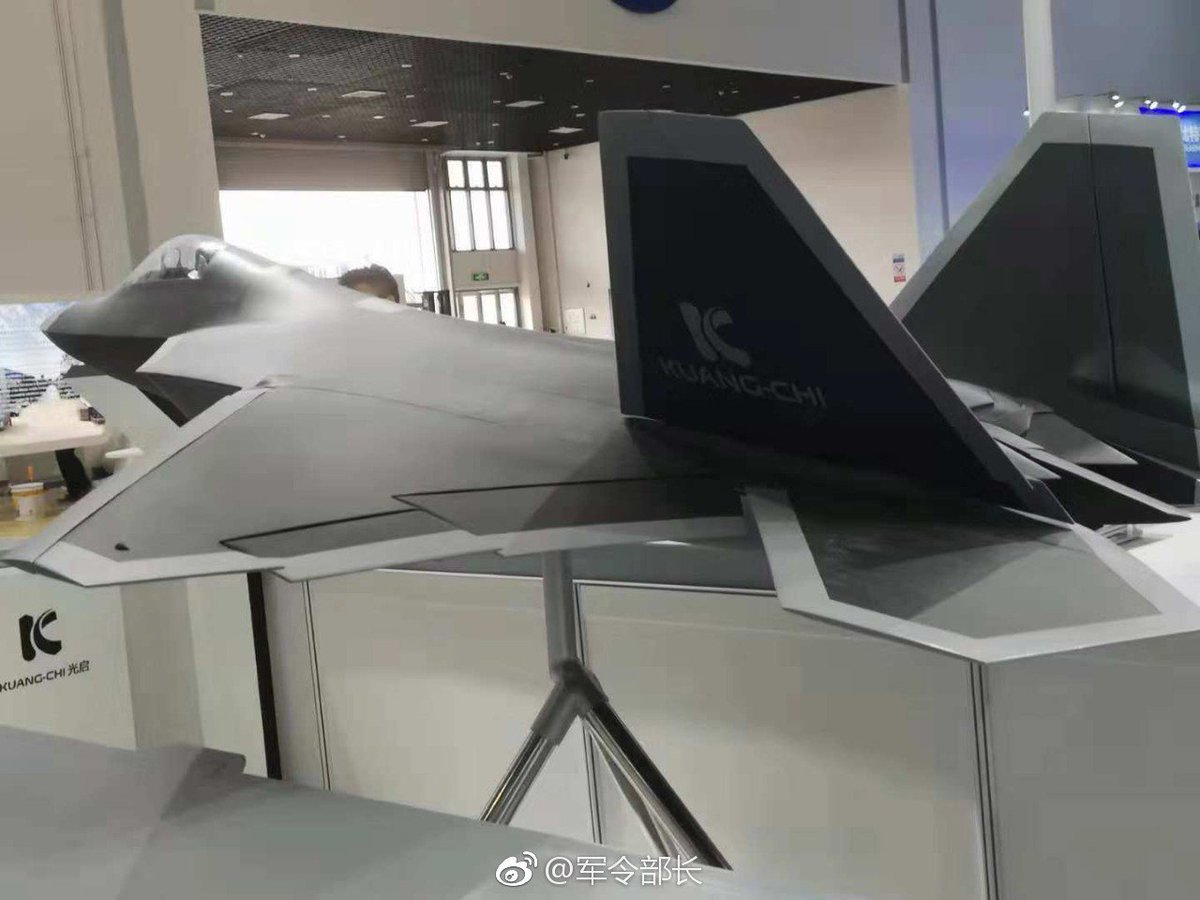 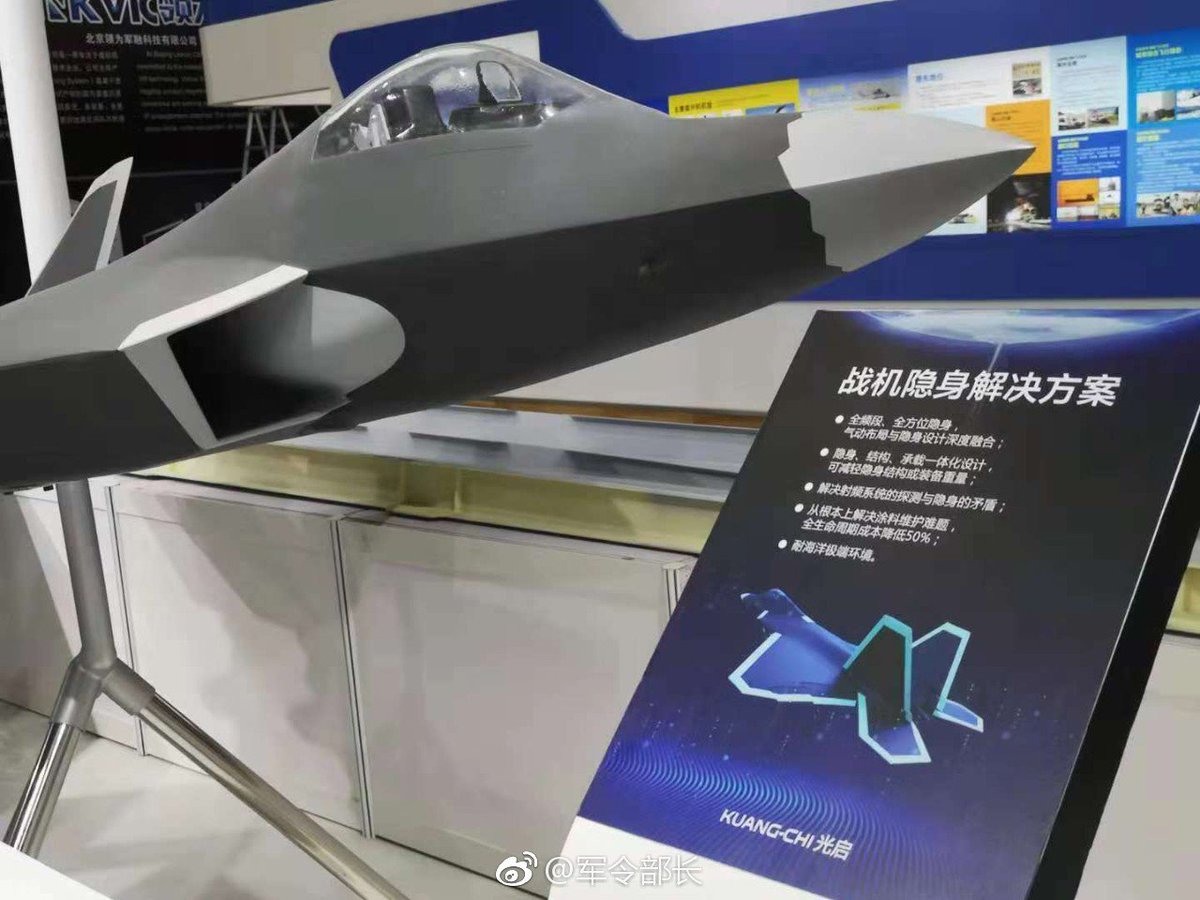 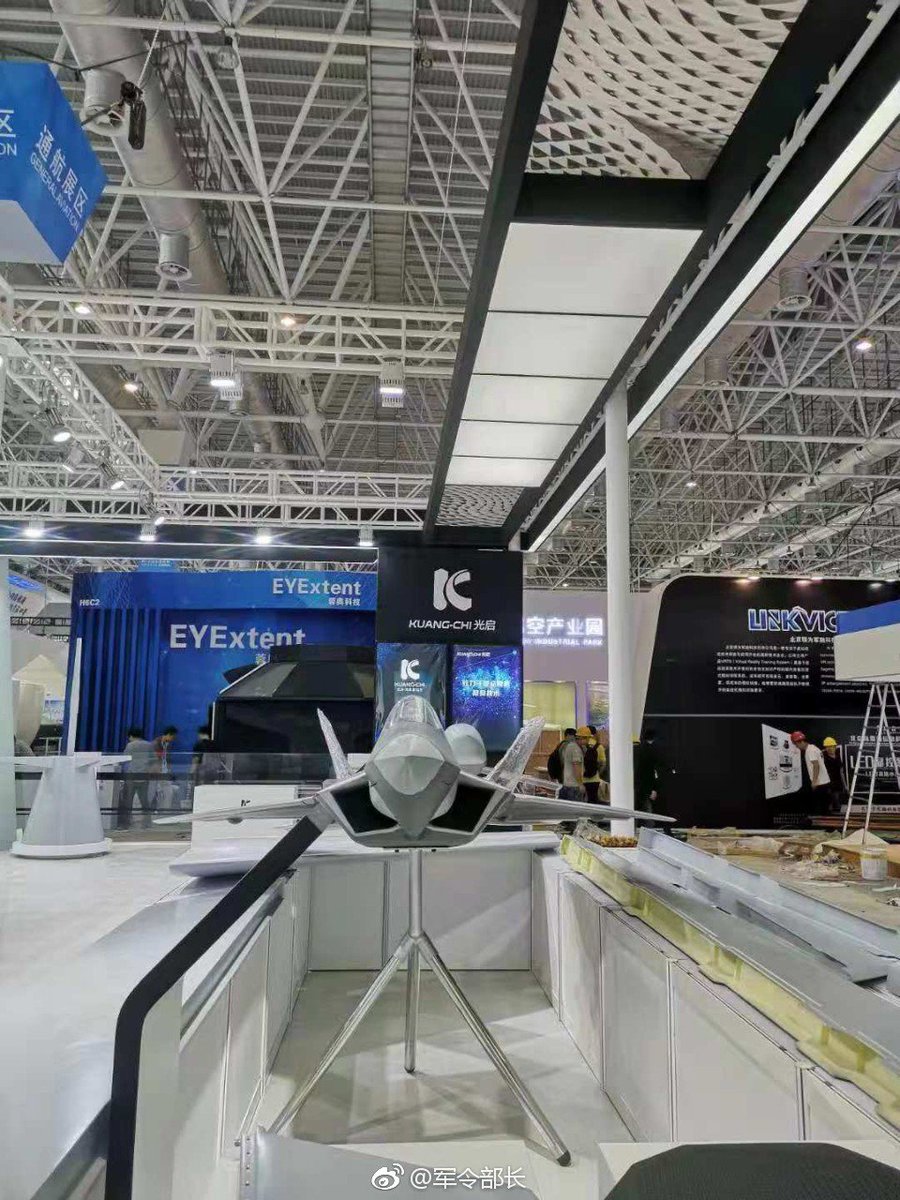 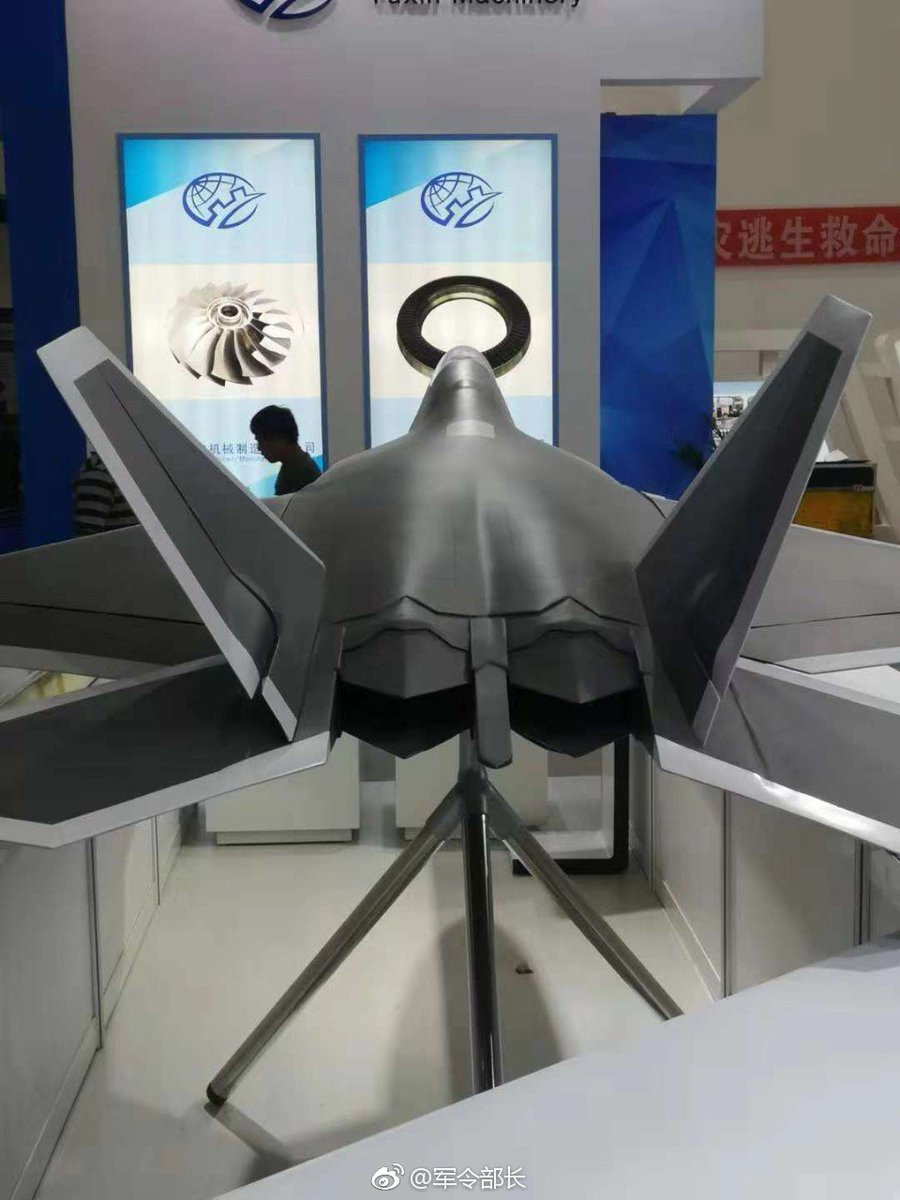 Kuang Chi is a Chinese technology company that dabbles in a little bit of everything, including aerospace, but the company itself doesn’t dabble in aerospace enough to build a full-scale fighter. The company produces radar-absorbent coatings and, strangely, is showing off where its coatings are applied on an F-22 Raptor and a Joint Air-to-Surface Standoff Missile (JASSM)—also an American weapon.

This company produces radar-absorbent materials, so they’re presenting their wares with essentially any model/mockup they can get their hands on (which also includes a mock AGM-158): 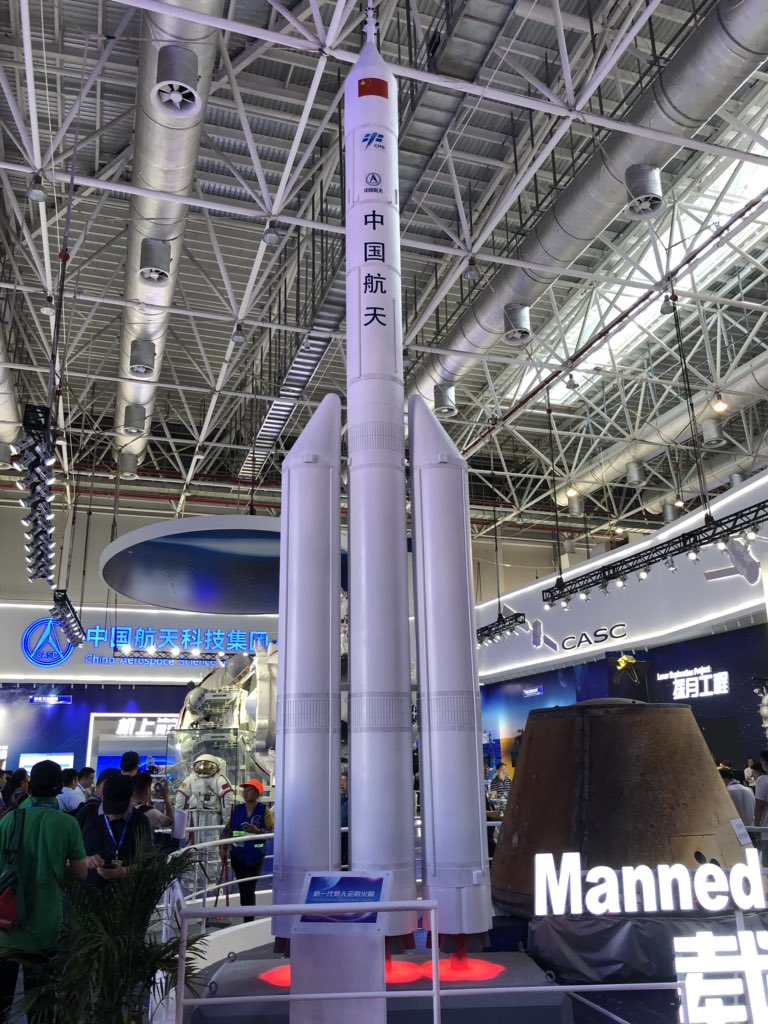 The WS-300. Yet another armed UAV (Photo by twitter.com/AsiaJetWatch) 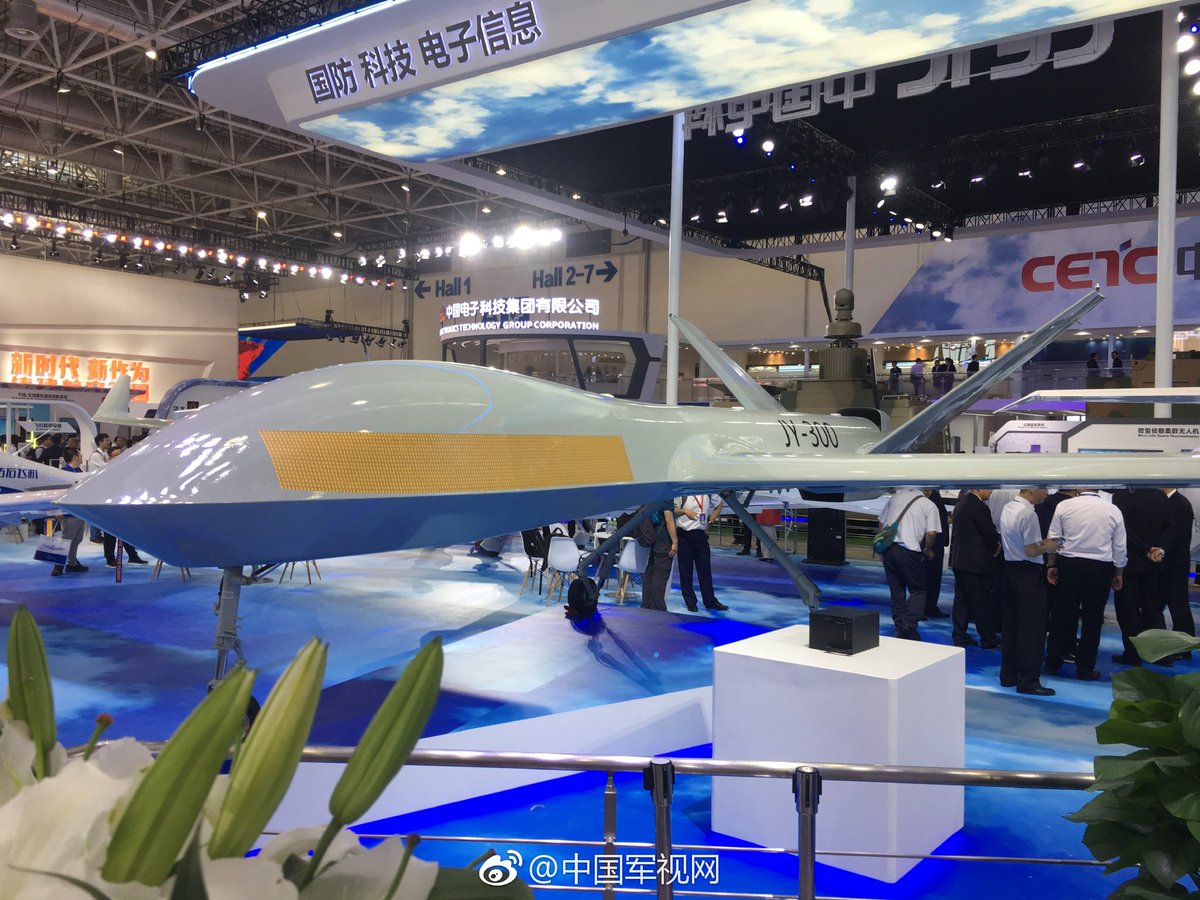 Wing Loong II with weapons and primed for export. (Photo by twitter.com/AsiaJetWatch)

The Zhuhai exhibition will also showcase the Y-20, a versatile transport aircraft, which is designed to carry cargo and personnel over long distances in complicated meteorological conditions.

Airshow China is an international aerospace trade show endorsed by the central government, held every two years since 1996 in Zhuhai, Guangdong Province. The show was originally designed as a place for displaying only aircraft yet it has grown into a defense exhibition showcasing China’s most up-to-date military equipment. The 2016 Airshow China included participants from 42 countries with a total of $40 billion worth of deals struck.

Source: By XAIRFORCES.NET with (popularmechanics.com) – 7 November 2018