A pair of Royal Netherlands Air Force F-35As paid photographers shooting along the rim of Death Valley’s “Star Wars Canyon,” also known as “Rainbow Canyon” and by its military route name, the Jedi Transition, a spectacular visit yesterday. The pair dropped into the valley below the canyon rim before popping up and blasting low over arcing lenses and clicking shutters. Photographer Dafydd Philips was there snapping frames and, thankfully, taking exhilarating video of the unique encounter. Check out the video below:

If the video doesn’t show up above, click here, it will take you directly to it on Facebook.

Dafydd, who often scales the lush hills around the UK’s famous Mach Loop, capturing all types of aircraft flying at low-level, traveled to the U.S. for a week to take in what has become America’s own miniature version of that legendary aircraft photography destination.

But this ‘close encounter of the 5th generation strike-fighter kind’ wasn’t just by happenstance. Our good friend and contributor, flying photographer Frank Crebas of Bluelife Aviation, put it together, along with our other great friend Rich Cooper from the Centre of Aviation Photography, and location coordinator Tim Laurence, not to mention
the 323rd Test and Evaluation Squadron (TES) at Edwards AFB.

Frank has flown missions alongside RNLAF’s F-35s based out of Edwards AFB as part of the combined F-35 test effort and his photo work documenting the RNLAF’s new fighter’s developmental road to initial operating capability has made its way all over defense and social media. Rich Cooper arranges the world’s best aviation photography opportunities and takes some of the best shots around as well. With Frank and Rich acting as a nexus between the aircrews and photographers, the magic was able to happen. 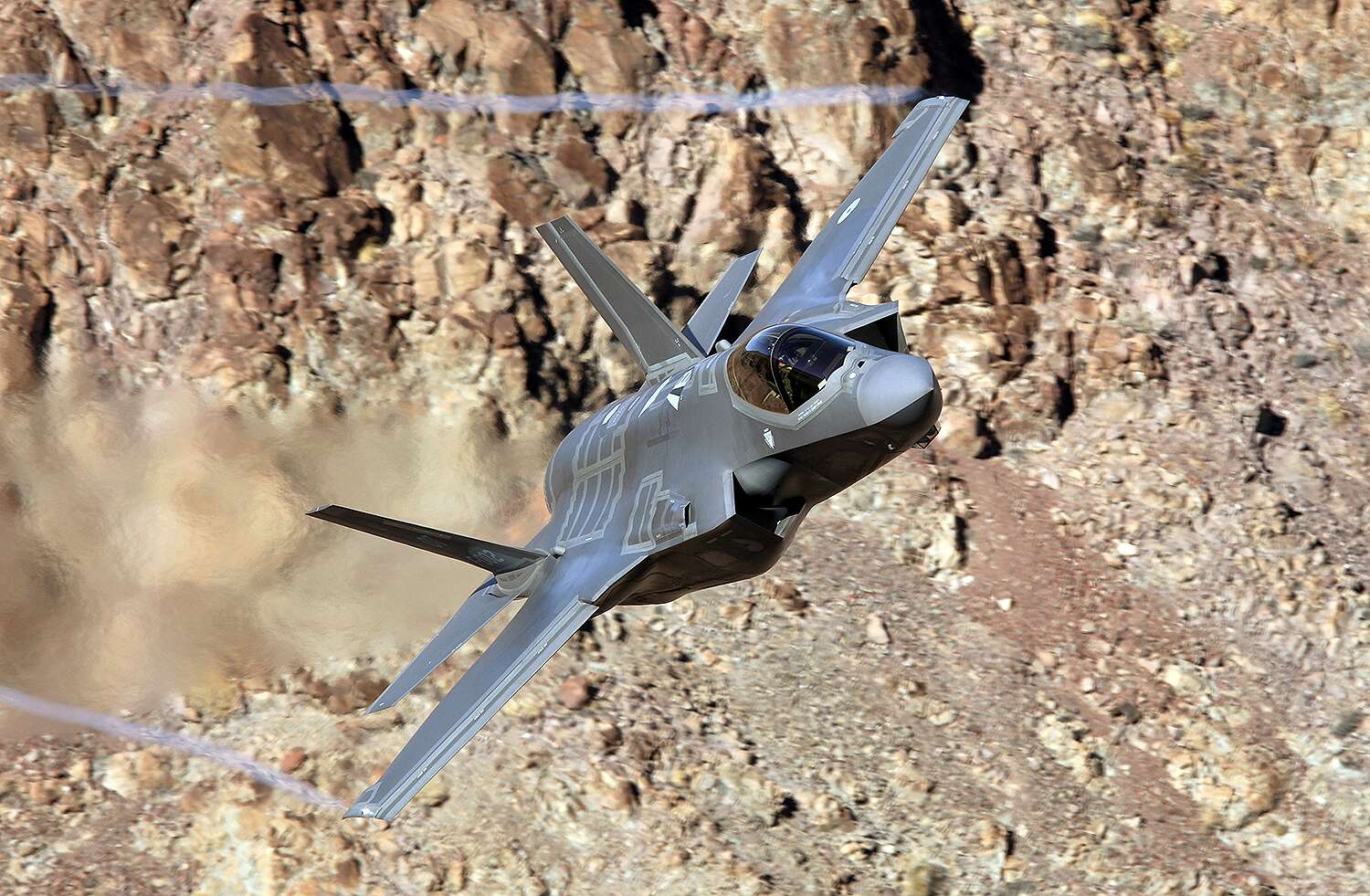 Although this was not by any means the first time F-35s thundered through the canyon, it certainly was the most dynamic. The jets showed up after finishing a sortie supporting exercise Green Flag. In the end the spectacular visit by the F-35s was a win-win for the RNLAF and the F-35 program as a whole. Pilots got to practice a bit of complex low-level flying while also gaining a bunch of publicity in the process. Regardless of your stance on the F-35, there is no doubt that those who have shepherded the program along, from the pilots to the test contractors to the ground support crews, deserve a ton of recognition for their hard work and dedication. These shots of the F-35 in action, and others like it, certainly provide that recognition is spades.

As Rainbow Canyon continues to draw aviation photographers and military technology enthusiasts from around the globe, it hasn’t disappointed in providing spectacular subjects for photographers to shoot on an incredible backdrop, as well as some unique spotting opportunities. For instance, just last week one of Area 51’s rare F-16Ds blasted through the canyon with an interesting sensor attached. But these F-35s put on an entirely different level of display altogether and thankfully we have video and pictures to show for it.

BY Tyler Rogoway @Aviation_Intel; Check out this amazing shot by Steven Comber of an @thef35 making an up close and personal pass through Star Wars Canyon. Read how this photo happened see the amazing things Steven and the @COAPhoto

Make sure to check out Dafydd’s incredible photo collection on flickr linked here, take the time to follow Bluelife Aviation on Facebook, and checkout the Centre of Aviation Photography. Also keep up with all the awesome stuff the 323 TES and their F-35s are up to by liking their Facebook pagelinked here.