Kenya to get $418 million military equipment from the United States

The U.S. Department of State has approved a $418 million contract for military aircrafts and weapons to be delivered to Kenya to aid in the fight against al Shabaab.

Among the packages are twelve Air Tractor AT- 802L converted cropdusters, two AT-504 trainer aircraft and some weapons, the U.S. Defense Security Cooperation Agency announced on Monday.

“The platform maximizes the Kenyan Defense Force’s close air support ability because it is a short-field aircraft capable of using precision munitions and cost effective logistics and maintenance,” the agency added.

The US State Department has approved the requested purchase by Kenya of twelve Air Tractor AT- 802L and two AT-504 trainer aircraft under the US Foreign Military Sale program. The estimated cost is 418 million USD. (Photo by airheadsfly.com)

The sale of the military equipment is pending final approval by the U.S. Congress.

The arms deal approved by the State Department covers the UK, Kuwait, Saudi Arabia, Kuwait and Kenya at a cost of $1.8 billion dollars in total.

Kenyan security forces are involved in the fight against Somali Islamist group al Shabaab which has extended its target across the border into Kenya. 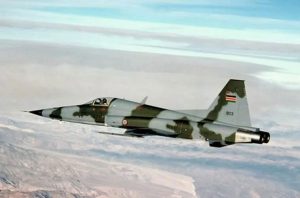 Many Kenyans have died in the fight against the insurgents in Somalia.

The concerned lot had its attention particularly drawn to 12 Air Tactor AT-802L pictured above that is part of a deal comprising weapons, two AT-504 trainer aircraft, technical support and program management.

The AT-802L is a light attack aircraft that the Kenya Defence Forces is planning to use in the war against terror.

Weapons including guns and bombs can be fixed under the aircraft’s wings and can still move at a higher speed than most helicopters used by KDF suring certain aerial attacks on al-Shabaab in Somalia.

Kenya is set to use the planes to supplement the old F-5E Tiger II fighter jets since the new aircrafts are cost-effective and only need a short runway of less than 300 metres to land and take off.

This means, that unlike F-5E Tiger II fighter jets, the Air Tractor can be deployed to Somalia from a small airstrip in Mandera.